According to ancient Indian Legend, the good spirit 'Yuquiyu' ( or 'Yokahu' ) reigned on his mighty mountain-top throne, protecting Puerto Rico and its people.This tropical 'Rain forest' occupies very little area in Puerto Rico, only a single, crescent shaped, band on the windward side of the El Yunque mountains. It lies wholly within the El Yunque National Forest Reserve. The actual rainforest is at the top, you must drive to the top of the road and hike up to see the cloud or dwarf forest.

In reaching this natural area you believe that the Sierra Pandura kneels before the force of the waves of the Caribbean Sea. Such is the beauty of Punta Yeguas, with three ropes or tip of sedimentary rock that are imposed on small sandy beaches.

Humid forests that cover the cliffs between the capes will be one of the first impressions of this diverse landscape, which changes to pasture amidst meadows and ravines that make their topography one of the most spectacular views of Puerto Rico. From the top of the reserve you can be seen to the east Vieques Island and to the west the Sierra Pandura, which rises in front of your horizon.

Adentrándote in this landscape you could find up to some 85 species of plants, 37 species of birds, 8 species of reptiles, 6 amphibians and 4 invertebrates that have been documented in this book. One of the most significant species of flora is the Ortegón an evergreen tree endemic to Puerto Rico and endangered which is limited to the southeast. Come and see this tree, whose protected population here is the largest in a reserve in Puerto Rico.

And where the name of Punta Yeguas out? This comes from the use that was given after the southern boundary of place where neighbors still tend to leave their horses grazing. However, the official name of this natural area honors Dona Ines Maria Mendoza, teacher, educator, writer and civic, social and political leader, who was the wife of Luis Muñoz Marín, the first elected governor of Puerto Rico (1949 thru 1964 ). Dona Ines was a member of the first Board of Trustees of the Conservation Trust of Puerto Rico, being a pioneer of the conservation and protection of the nature of our islands.

On the east coast of the municipality of  Humacao,Puerto Rico, known as "Capita of the East". Among the main attractions of the town such as the Cayo Santiago island, or Isla de Monos(Island of Apes)  and the Astronomical Observatory, is the first Natural Reserve Ecotourism in Puerto Rico.In about an hour by road PR-3 arrived at the Humacao Nature reserve, formerly called "Wildlife Refuge". Admission, free of charge, read "INECOH" (Eco-Tourism Initiative Humacao) 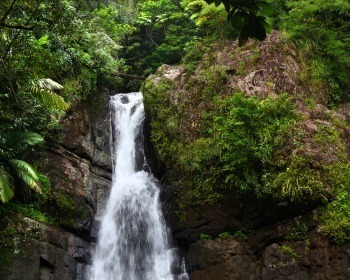